I am a romantic and dreamer at heart.  So when reading for pleasure I can be found curled up with a story that will make me laugh, or cry, will draw me in and make me dream. It will be a tender, sweet love story, or a griping adventure, a roll on the ground-double up laughter, or a biographical heart stopping honesty I felt I had to read, but always you will find me tucked away from everyone, in my bedroom, in the car, outside alone on a quiet bench in the sun, or curled up on the couch, engrossed and absorbed into another world.  I have just finished one such book I would love to share with you…

“This Time Together – Laughter and Reflection ”    – By Carol Burnett.

For Christmas this year I received  from a very dear friend this beautifully written book of antidotes and reminiscences.  Carol shares her thoughts and feelings, from the hilarious to the heartbreaking, and special moments during her career.  I was surprised to find how moved I was, and only wish I now, had read her first book “One More Time, a memoir which is more like a letter to her daughters telling them of her life growing up in a dysfunctional family (she says), before she became famous.

In “This Time  Together” each chapter, though brief, introduces us to the people Carol worked with, or had met, that made an impact on her during her career.  From the first chapter, I had the feeling I was sitting on the couch with her, telling me some of the things I knew, and a lot I didn’t know, from her first hilarious meeting with her idol, Jimmy Stewart, her early days in Hollywood with her nanny, and her time on the Garry Moore Show.  She shares her blunders, her successes and all the 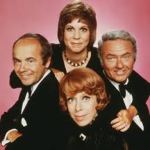 bits in between.  As a huge fan of her show, “The Carol Burnett Show”,  she is an amazing actress, talented, writer and a legendary comedienne, she is straight up, genuine and daring, spunky, even appearing bolshy.  But there is a very sweet, loving, gentle, tender side to Carol that we rarely see, which she shares with us in this book.  She admits to even being a “chicken”, doesn’t like confrontations, adores her fans, and her friends even more.

One of her dearest friends and my idol, Julie Andrews and Carol made three wonderful television specials together and have been friends for about 50 years.  They joke that if they ever did another special they have decided to call it “A Metamucil Musical with Julie and Carol.”  Other friends she made along the way were Lucille Ball, Joan Crawford, Barbara Stanwyck, and Marlon Brando, to name a few.  She lets us in on tit bits, her reluctance to flying, her learning the computer and dating, having divorced from her first husband, and also husband number two, Joe Hamilton, she eventually met and married Brian

Millar in November 2001 and they are still happily married today.  Carol briefly shares the death of her beautiful daughter Carrie from cancer in 2002.  Carrie herself an accomplished actress, writer and musician.  when Carrie died it was just before the completion of a play they were working on together called “Hollywood Arms“, a stage-version of Carol’s memoir “One  More Time”.  It eventually opened on Broadway October 2002 and closed early 2003, winning a Tony Award.

It is her sincere tenderness to a young fan, named Kathy, that moved me the most. Carol had only known of her a short time but felt a connection and compelled to be by the young girl’s bedside, holding her hand as she passed away.  Carol finishes the book with adding up all the gratefuls in her life, her husband, daughters, two grandsons, the time she had with her beautiful daughter Carrie, the people she has had the pleasure of working with, being happy and healthy and living her dream.  She is a remarkable woman, best remembered for her mop and bucket, the Tarzan call and the earlobe pulling, I hope we hear a lot more of her in the future. I sure enjoyed this time together.

As I finish this review, I flipped back through the pages and a passage, “a legacy” if you will, that Carrie left her Mum, stops me, it reads:

“Our legacy is really the lives we touch, the inspiration we give, altering someone’s plan – if even for a moment – and getting them to think, rage, cry, laugh, argue.  More than anything, we are remembered for our smiles; the ones we share with our closest and dearest, and the ones we bestow on a total stranger, who needed it RIGHT THEN, and God put you there to deliver.”

and my tears flowed again.

Known also as the Patientdreamer I am a writer who loves to dream, and is passionate about writing stories for the young so that they may join me in the wonders of adventure in countries and cultures afar, and in special moments to remember.
View all posts by Diane Tulloch →
This entry was posted in Interviews, What moves me and tagged Barbara Stanwyck, Carol Burnett, Hollywood Arms, Joan Crawford, Joe Hamilton, Julie Andrews, Lucille Ball, Marlon Brando, This Time Together: Laughter and Reflection. Bookmark the permalink.

9 Responses to “What moves me…”