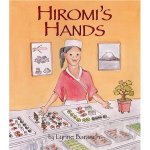 Written and Illustrated by:  Lynne Barasch

Opening Lines:  The day my parents, Akira and Kaoru Suzuki, left for Japan in 1999 was one they would never forget.  They were taking their first vacation in thirty-five years.  Mama and Papa were going to visit family they hadn’t seen in a long, long time.

Synopsis:  While the opening lines are of the present day, the following pages go back in time to tell of Hiromi’s father’s childhood, meeting her mother, his long apprenticeship to become a Sushi chef.  A year cleaning floors, a year cooking rice until after ten years he became a full-fledged chef.  Eventually moving his family to New York to work in a New York Sushi Restaurant, working from early morning till night.  Because Hiromi misses her hardworking father and wanted so much to spend time with him, she accompanies him to the fish markets, and eventually persuaded him, (although she respected and practiced old Japanese customs) to let her work in his restaurant. It is not heard of for Japanese woman to become Sushi chefs, but her father realised that in New York life was different and he also realised she was very keen. After three years of traditional Japanese teaching, by her father, earning her own yangi,  Hiromi became the first Japanese woman Sushi Chef, in New York.  As it says on the inside front cover flap  “..a true story of a young girl’s determination to follow her dream.”

Why I liked this:  It is actually when I flicked to the last page and read the Author’s Note we learn the back story which sealed my love for sharing this book with you.  Lynne first met Hiromi a five-year old and in the same Kindergarten as her own daughter.  Lynne’s daughter and Hiromi became lifelong friends.  It was years later that Lynne’s daughter encouraged her to write about her friend, and how she became the first woman Sushi chef, in New York, in 1998.  We also learn where Sushi was developed and it’s fish preservation in ancient Southeast Asia by the Japanese.  On the very last page is a Glossary and Pronunciation Guide of the Japanese words and names used throughout the story. This book proves to be very educational, not only in old traditional beliefs, methods and language of Japan, but also we are shown the numerous styles and names of Sushi along with names of fish, some of which I had never heard before, either.  Great addition for kids learning about Japan.

Resources/Findings:   Lynne’s website, and she can be contacted for school visits….   http://www.lynnebarasch.com/hiromi_s_hands_47504.htm

A little about Lynne and her books from The New York Library…   http://www.nysoclib.org/kids/authors/barasch_lynne.html

For more books with resources please head on over and visit the lovely author Susanna Leonard Hill’s blog and find the tab for Perfect Picture Books.    Her blog is full of resources links and activities associated with the books reviewed by many authors.

Known also as the Patientdreamer I am a writer who loves to dream, and is passionate about writing stories for the young so that they may join me in the wonders of adventure in countries and cultures afar, and in special moments to remember.
View all posts by Diane Tulloch →
This entry was posted in Folklore / multicultural, Picture Book Review, Reading Aloud and tagged Lynne Barasch, Susanna Leonard Hill, Sushi, Sushi Chef. Bookmark the permalink.