First to the Top 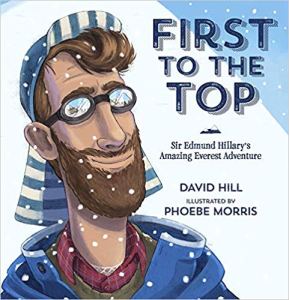 Opening Lines: When Edmund Hillary was a boy in New Zealand, he built rafts to explore the Waikato River. When he grew up, he explored other places. He climbed mountains. He rossed Antarctica. He was one of the first two men to reach the summit of Mt Everest, the world’s highest peak. This is his story.

Synopsis: Up on the world’s highest mountain, the sky is tinged the black colour of space and the air is almost too thin to breathe.

How did Ed, a small, shy boy from New Zealand, grow up to become the world’s most famous mountaineer and adventurer? How did he climb Everest and do so many other astonishing things?

This exceptional picture book, written by internationally acclaimed children’s author David Hill and illustrated by Phoebe Morris, tells the story of Sir Edmund Hillary and his climb to the top of Mt Everest. It’s a story about courage, skill and determination, and an inspiration to anyone who dreams of reaching the top.

Why I like this: This is an inspiring story of courage and determination. When

researching this book I found one of the reviews on amazon best described how I felt about this book…   following the life of Sir Edmund as a child in rural New Zealand to being one of the first to climb Mt Everest. Planning, and creating the perilous journey up the mountain. I appreciated how respectfully the Himalayan mountain guides were represented, and the lifetime friendship that Sir Edmund forged with his personal mountain guide, Tenzing Norgay was heart-warming. The book describes how Sir Edmund frequently returned to Nepal and helped fund schooling and resources for the people there. Children will enjoy the animated cartoon-like characters depicted in the cool crisp snowy illustrations. Informative and also included a timeline in the back.

Resources/Findings: Here is a write up from Penguin Books regarding prolific and highly regarded New Zealand author David Hill and his many books and accolades and awards they have each received.   Too many to mention I thought I would just post the link for you to read….   https://www.penguin.co.nz/authors/david-hill

David Hill was interviewed for Taranaki News in November 2018 in which alongside great photos of him at work, it also tells of his thoughts and processes in writing for children, from picture book, middle grade and young adult. He shares interesting facts in research for his New Zealand icons series. And when he wrote First to the Top the Ed Hillary tale, he reached great heights with his word count. The first draft was 6000 words long, so when he cut it down to 2000, he thought he’d done so well he sent it off to the publisher. He received a short and not-so-sweet email: “David can’t you bloody count?” Read all about it here….   https://www.stuff.co.nz/taranaki-daily-news/lifestyle/108933492/david-hill–a-writer-in-full-and-messy-flight

A little about the illustrator Phebe Morris… http://phoebemorriscreative.com/about

Although I didn’t find any teacher resources here are some questions that could be used…..

How many times did Hillary climb Everest?

Did Hillary climb Everest with oxygen?

Can you climb Mount Everest without a guide?

Who was first Hillary or Norgay?

Where can you see Edmund Hillary today?

Is it hard to climb Mount Everest?

How many camps did they have on Mount Everest?

What did Edmund Hillary and his brother do as children?

What do you think Edmund Hillary took with him when he climbed Mount Everest?

I’m always happy reviewing Picture Books that come my way and share them with you.  If you would like to see more please pop over to Susanna Leonard Hills Blog where there are hundreds of books reviewed by other like minded authors and writers.  Thank you for popping in and I hope you return again soon.

Known also as the Patientdreamer I am a writer who loves to dream, and is passionate about writing stories for the young so that they may join me in the wonders of adventure in countries and cultures afar, and in special moments to remember.
View all posts by Diane Tulloch →
This entry was posted in Perfect Picture Book Review, Picture book, Picture Book Review, Susanna's PPB Fridays and tagged David Hill, PB conquering Mt Everest, PB for children on Courage, PB on Determination, Perfect Picture Book - Friday. Bookmark the permalink.